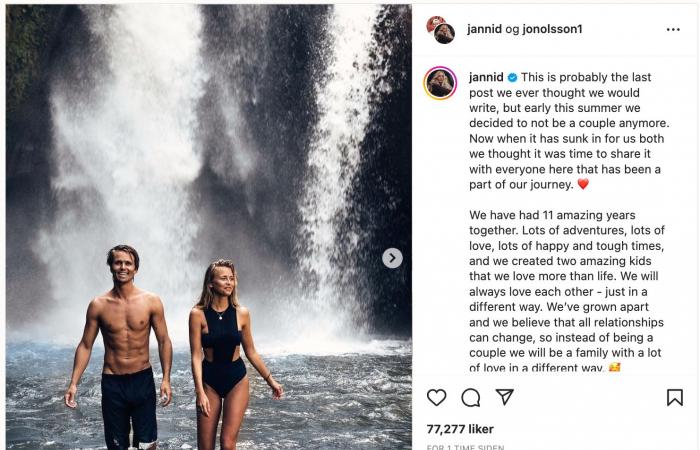 Janni Delér (32) and Jon Olsson (40) are separating after eleven years. – We will always love each other, the influencers write on Instagram.

– This is probably the last post we ever thought we would write, but early this summer we decided not to be a couple anymore, the couple writes in a joint Instagram post.

Janni Delér (32) is one of Sweden’s biggest influencers with over 1.2 million followers on Instagram.

Jon Olsson (40) is a Swedish freerider star and popular YouTuber with over 1.5 million subscribers.

The celebrity couple are separating after eleven years. They have two children together, and have been living in Cyprus recently. Together they also run the clothing brand C’est Normal.

– We will always love each other, just in a different way. We have grown apart and we believe that all relationships can change. Instead of being a couple, we want to be a family with a lot of love in a different way, they write further in the post.

The decision must have been made some time ago.

– Nothing else has happened, so no reason to speculate, they write.

Delér and Olsson are very popular on social media, where they share glimpses of their luxurious life.

In March, the couple faced heavy criticism during a trip to Saudi Arabia. Amnesty Norway accused them of glorifying the controversial country.

PREV Carlsen on the Niemann conflict: – I will say something, but not everything
NEXT Magnus Carlsen won the new Champions Chess Tour tournament in superior fashion