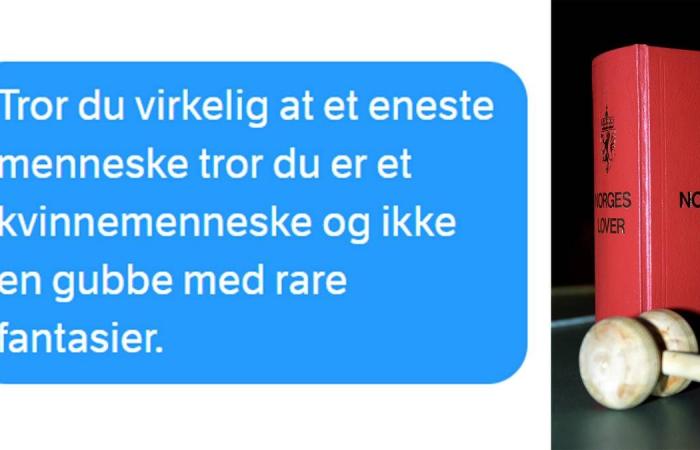 A 53-year-old man living in the Bergen region has been convicted in the Supreme Court for making hateful statements against a trans woman.

The threats were made in several statements on Facebook. It is the first time a case of this nature has been taken up in the Supreme Court, after the man was convicted in the District Court and the Court of Appeal.

The case has previously been in the Court of Appeal and the District Court, but went all the way to the Supreme Court.

It was on 24 March last year that the woman got into an argument with a man on Facebook.

The man in his 50s in the Bergen area wrote a number of disparaging comments about the gender identity of the woman.

He didn’t know she had changed sex.

The comments he wrote to her have now been judged to be over the limit of what is legal.

Man on Facebook:Do you really think that a single person thinks you are a womanizer and not an old man with weird fantasies.

Man on Facebook:Having said that, it is incomprehensible to me that the authorities still allow you to have care responsibilities for children.

Man on Facebook:Perverted man-pigs who insist that they are little girls have no defamatory power, strictly speaking.

The Supreme Court has unanimously concluded that a total of four statements on Facebook had such content that the statements fall under Section 185 of the Criminal Code on hate speech against vulnerable minorities.

Public prosecutor to NRK: – Way over the limit

– We are very biased with the impact of this view. This type of harassing speech goes far beyond freedom of speech. When it becomes full of hatred against trans people, it is over the limit of what is legal, and the Supreme Court has now confirmed that, states attorney Rudolf Christoffersen to NRK.

According to the state attorney, the defense in the case believed that there had to be a higher threshold for commenting on someone’s gender and sexuality than on, for example, ethnicity and skin colour.

This must have been a major topic of discussion in the Supreme Court.

– I strongly disagree with that. We believe that all groups must be included and protected equally against hate speech, says the state attorney.

The public prosecutor and the woman eventually prevailed, and the verdict will now stand as historic.

The woman: – Glad that the matter was given priority

The criminal law in this field was tightened in December 2020. Not long after, the case with the man from Bergen surfaced.

NRK has previously interviewed the woman in the case.

She lives in another city and is glad the matter has been given priority.

– I was pleasantly surprised that the police got hold of this, she told NRK when the verdict came in the district court.

The case has received a lot of attention in the media.

– I think that is good. This gives a clear signal about what is within freedom of expression and what is not, says State Attorney Christophersen to NRK.